The direct firing of security forces is the leading cause of Kolbars's death. But the choice of dangerous roads to cross the border and get caught in the snow and cold is another factor that has killed many Kolbars.

A few days ago, the body of Asad Sidani-Fard was found by local residents after 158 days of disappearing in snow and blizzard. The bodies of Behlool Seydani-Fard and Barzani Mihani, who had gone to Culberi in threes, were found after 135 and 114 days, respectively.

In the last 11 years, 68 colts have died in the snow and cold, and 22 people have suffered frostbite and injuries. Five of these Kolbars were under 18 years old. In 16 cases, the Kolbars have died in groups, and three Colbrans, who were frostbitten and injured, suffered amputations.

Statistics of casualties by border points:

The names of the Kolbars who died by years: 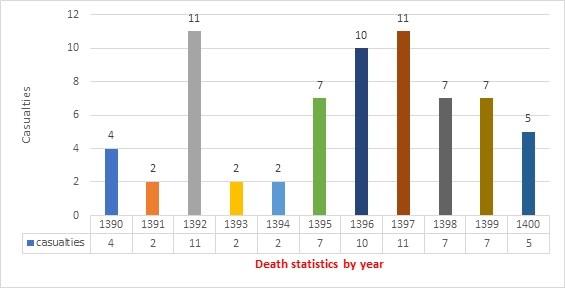 Oshnavieh; Security forces detain an elderly citizen and his child